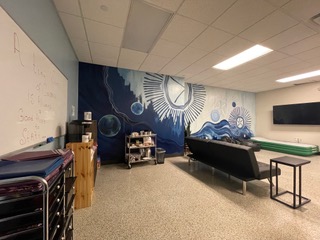 Implementing harm reduction practices, diversion programs, and mental health crisis interventions have grown increasingly supported over the past year, from city officials to individual community members. However promising these initiatives are, they still can get lost in the day-to-day interaction between people in crisis and individual police officers and first responders. Even though our understanding of how addiction hijacks the brain has changed significantly over the past decade, transitioning addiction to being a public health issue, rather than a criminal justice one, is still ongoing.

The services at The Sobering Center have been a critical step in reframing how intoxicated people are cared for by public services. This month, the center celebrates its three year anniversary and in those three years, it has been a well-used resource for local police and first responders to transfer low-risk intoxicated people who would otherwise be sent to the county jail or the hospital to sober up. The admissions process has been a simple one up until recently: admits were separated by gender and allowed to “sleep off” their intoxication safely, under the watchful eyes of trained staff, and then released once they were coherent and sober enough to walk out safely. Technically, the center did what it was positioned to do, but it really could achieve so much more in terms of providing for those who came in for care.

Enter Laura Elmore, who joined The Sobering Center as Executive Director in 2020 and had a greater vision for the center to become a true bridge to recovery for people who needed help. Part of this expanding vision included providing appropriate and responsive care to people based on their symptoms and level of need from a clinical standpoint. What once was a safe sobering place is now also where someone can access a transfer and bed for addiction treatment. When it comes to recovering from addiction, timing is everything, and there’s no better time than coming down off of drugs and/or alcohol.

Digging into providing care based on the above, also means providing an appropriate space and environment based on what kind of intoxication a person is dealing with. Depressants like alcohol and opiates need beds and an opportunity to sleep. Stimulants are on the complete opposite end and so The Sobering Center has launched a fully dedicated space for those admits who are coming down off of stimulants and need a safe place to be.

Why in the world does that matter? Well, we recently caught up with Doug Smith, founding board member of The Sobering Center and strong supporter of the new stimulant dorm, to talk about his personal connection to recovery and why the creation of this dorm is a true game changer for our community’s approach to stimulant addiction and intoxication. 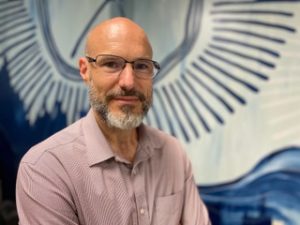 “I’ve battled mental illness since I was about 13 or 14 years old, but I didn’t recognize it that way. That said, contemplating and actually attempting suicide at 12/13 years old, it’s safe to assume there’s probably a mental illness there. There were some pretty dark periods during college, but I managed to get through that. I volunteered at the crisis hotline, because it was a lifeline for me during those times when I thought of suicide. After graduation, I was on pretty solid ground, and helping others in crisis was a way to give back. The hotline was a launching pad for me to get my masters in social work, but I started to struggle again. After a suicide attempt, I was admitted to a psychiatric hospital. I was also self-medicating with alcohol. Not a considerable amount, maybe two or three beers a day, which was kind of how I created a sense of being able to be within my own skin. But around the time that I turned 30, it started to get a hold of me, and the three beers turned to four beers, then turned to five beers and a little bit more on the weekends. All this kicked me into a downward spiral again.

The mental breaks became more severe and I realized that I was dealing with bipolar because I was making strange manic decisions and things like that. When I had just turned 37, I found myself weighing whether to commit suicide but instead I went out on the streets found street drugs, specifically crack cocaine. Within two and a half years of having tried crack cocaine I wound up in the ICU three times, in the back of an ambulance six times, two rehabs, three psych hospitals, I lost my marriage, lost my career and ended up committing a robbery spree to get more drugs. That was my downward spiral to incarceration, and I ended up serving five years, eight months inside of Texas prison.

When I was there, I had to go off of my psychiatric medications because if a person has a mental illness, they deprive you of jobs and the ability to be a trustee. I went off my meds, struggled through the horrible mental chaos one experiences when they suddenly go off psychiatric medications. Once I got through that, I started to find activities that gave me a sense of meaning. I was a peer educator doing sexual assault prevention, communicable, disease prevention, things like that. When I paroled three and a half years later, I had to contend with the reality that my mental state wasn’t as healthy as I thought it was and I went into free fall again. I went back onto the psychiatric meds, found a good nurse practitioner who would prescribe the meds, and had an amazing therapist. Now I volunteer with my community, life is good. I get to do leadership development, including for people who’ve had a similar experience to my own.

Well I, I knew sobering centers because of where I worked, which was in justice reform. I was really keen on studying different models of diversion and a sobering center is definitely one of those. The Harris County Sobering Center was doing particularly interesting work because they used certified peer support and they were able to track and do some level of peer navigation with folks. That was a model I really liked that also visited the one down in San Antonio, which I absolutely love because it’s all integrated with other services such as detox and mental health diversion. So I knew about the model, but I didn’t know that Austin and Travis County were planning to do one until council member Casar called me and said that they were going to nominate me to be on the board.”

“Why would the stimulant dorm impact someone like me? Science is really important when you’re talking about drugs like crack cocaine or methamphetamine. Basically, you are getting a dose of dopamine that is 10 times higher than normal activities that release dopamine like eating, watching Netflix, or shopping. It’s all encompassing and what the science knows is that there is an equal and opposite fall once the dopamine wears off, to the extent that it will create a sense of euphoria and the fall produces an equal sense of desperation. The coming down off of those drugs can be really dangerous.

Just merely using crack was never, for me, what caused all the problems. It was always the bizarre actions that I took when I was coming down off of crack. Everything from cleaning out my bank account all the way to trying to score heroin so I can shoot it up just to bring my heart rate down. I thought, “I might as well just go commit this criminal action, run to the crack house, smoke it up and then I could just die.” That was my thinking in those moments and when I reached out there wasn’t help available, not even peer-to-peer. I was on the verge of suicide or robbery at that point. Most of the people that I met inside of prison had similar stories to me and I was by no means unique. People who have committed robberies or burglaries and things like that, they will tell you that it’s out of desperation for more drugs. If someone could have intervened at the point that they’re clearly a threat to themselves, or to others, and they could be in a space where they could safely sober up and not lose their minds, it would make all the difference. Once the person has stabilized they’re in a better mental space and you can say, ‘let’s talk about some options for you and the many routes to recovery. There’s not one single way. Let’s talk about what the next step would look like for you.’

“We’ve seen The Sobering Center evolve. I think when all of us [board members] came on the board, we had a present vision like this but we needed to first get the sobering center off the ground. I was on the board from the beginning and opening it, finding an executive director, just getting the police to use it, etcetera, and we spent the first couple of years really focused on that. We had hiccups here and there, but we got into shape. When Laura came on we went from the initial  vision to what I think a lot of us had hoped for, which is that the Sobering Center would play a role in the community that’s more integrated with recovery supports and mental health supports, which is exactly where Laura has taken it. The whole team has been incredibly important, but there was  a vision that Laura had and it started from really modelling the type of the way in which we’re going to care for people. If we find a barrier to actually helping that person let the Sobering Center be that place that works through that challenge. Previously, we used to hold people for six hours and then discharge them out the door. We’d wake them up and send them on their way because they’re sober but now the Sobering Center holds onto people because they might be interested in treatment, but it’s going to be 72 hours before they get a bed.

The Sobering Center is playing a more and more robust role and for me I can’t describe the level of pride that I feel being part of an organization that would care for people like that. When I was approached with okay, well now let’s do a stimulant recovery and build a separate dorm for people coming off of stimulants, it just set me on fire. I am so proud that we’re doing that out on 6th Street, actually preventing DWI and engaging with the community. I could not be more thrilled with where it is right now and where it’s going.” 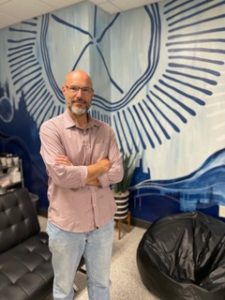 The Stimulant Dorm is open now and helping people! Thanks to the generosity of The Lola Wright Foundation, the space has been outfitted with couches and bean bags, multiple activities ranging from arts and crafts, card games, television, and a bright and beautiful mural. The mural was designed by Allie Walker and is her second commissioned piece at The Sobering Center. Check out her instagram at @femarttx. 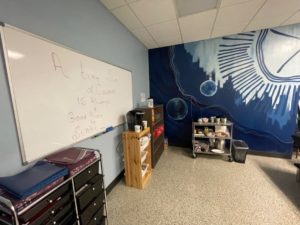 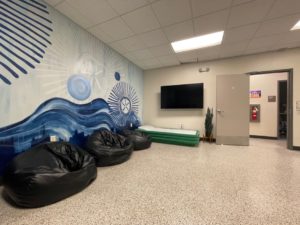 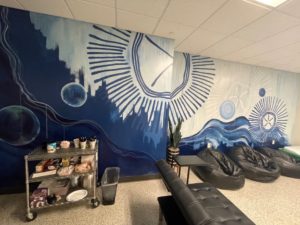